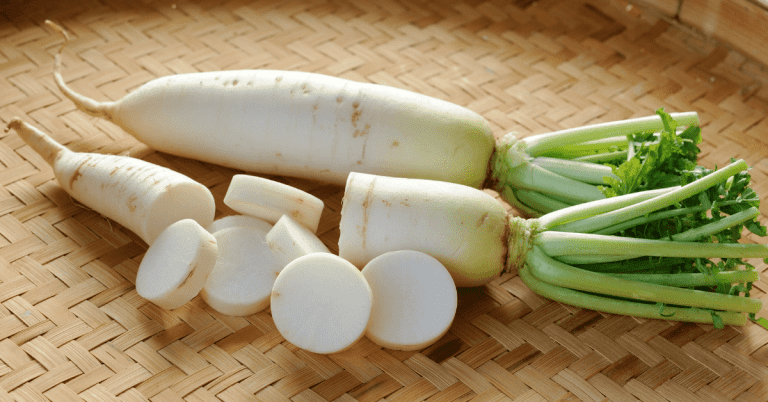 Daikon radish is a popular ingredient in Asian cuisine.

From slaws and casseroles to pickled veggies, it’s a staple ingredient in many dishes.

But what if you can’t find it in any nearby store?

Do not fret, as your local supermarket surely has at least one daikon radish substitute in stock.

In this article, I’ll show you what are the best alternatives out there and how they affect your recipe.

As far as flavor goes, white turnips are probably the best substitute for daikon radish. This root vegetable is sweet with a hint of spice. It’s crunchy when raw, but becomes tender when cooked.

Generally, you can swap these ingredients in a 1:1 ratio.

Still, keep in mind that white turnips are a bit milder than daikon radish. Therefore, you might need to be a bit heavier on spices to emphasize the flavor profile of your dish.

The only bad thing about white turnips is that they only grow in spring or fall weather. They’re not around all year round, so you might need to find another alternative for during hot months.

One of the best substitutes is its cousin, red radish.

But even though they’re related, these two veggies are not quite the same.

It’s also much bigger and resembles a pickled carrot in shape.

Red radishes are packed with micronutrients. Compared to daikon, they have a much higher level of vitamin C, the best booster of our immune systems.

Red radishes are quite a versatile cooking ingredient.

You can use it raw, cooked, grilled, or even picked. But because of their spicy note, you shouldn’t use them in the same quantities as daikon radish.

Start by adding it in a 1:2 ratio, then gradually add more if your dish misses that “something”.

Alternatively, you can mix red radish and turnips in equal amounts, as they complement each other so well.

Jicama might be a bit harder to come by in some parts of the States. But if it’s available in your area, then you should definitely consider using it as an alternative to daikon radish.

Traditionally grown in Mexico, raw jicama is probably the closest substitute to daikon radish in terms of texture. They’re both perfectly crunchy and crispy when eaten raw. As for the flavor, jicama is slightly sweeter and milder, with a hint of nuttiness.

You can use jicama in your dish in the same quantity as daikon radish. When cooked, they both absorb the flavor of other ingredients used.

Korean radish and daikon are relatively similar in appearance, but the former is slightly shorter and rounder – kind of like a potato.

Korean radish is thick and features a pale green color around the head. This is the easiest way to tell between the two.

Just like daikon, Korean pickled radish has tons of benefits for our health and it’s suitable for any kind of diet. However, if you don’t have any Asian supermarkets around, it can be slightly harder to find than daikon.

Korean radish is also a bit firmer and crunchier than daikon. As for the flavor, it’s mildly sweet with a hint of spice.

Still, that’s not a huge difference, and you probably won’t notice it with all the other things you put in a dish.

You can substitute daikon with Korean radish in a 1:1 ratio.

At the first glance, a parsnip appears to have more in common with a carrot than a daikon radish.

But that’s only true in appearance. Parsnip is a plant rather complex in flavor. It’s starchy like a potato, yet juicy and sweet like a carrot.

Furthermore, it has a slightly bitter note, just like a turnip.

When compared to daikon radish, parsnip is even richer in micronutrients. It has a very high level of minerals like phosphorus and potassium. It’s also packed with vitamins B5, K, and folate. Swapping daikon radish for parsnips is a great way to add these nutrients to your diet.

Because of their high starch content, cooking with parsnips can thicken your liquid. So when you’re making soups and stews, you can alter the consistency by using less or more of this ingredient.

As for the flavor, both parsnip and daikon radish will give your dish a similar taste. Parsnip can be somewhat milder but sweeter.

Most of the ingredients on this list are either seasonal or mostly sold at Asian supermarkets.

Cabbage hearts, on the other hand, can be bought in any grocery store.

And while they’re not the best substitute for daikon radish, they’ll work well when nothing else is available.

Cabbage will give you the same crunchy texture, but only if you use the white core. The green part of the leaves is simply too soft to imitate the texture of daikon radish.

One thing to note though – cabbage has about twice as many calories as daikon. When it comes to other nutrition facts, it has a higher protein, carb, and fiber content.

On the other hand, cabbage is also rich in important vitamins, uncluing C, B6, K, and folic acid.

Just like daikon, cabbage is sweet with a tangy note, but it’s a bit blander.

You might need to use a bit more in order to achieve the right flavor for your recipe. As a substitute, this cruciferous vegetable is best used in salads and stir-fry dishes.

The name of this plant is a bit misleading, as it’s not a radish at all.

With that being said, horseradish and daikon radish do look alike. But as soon as you cut or bite into it, you’ll realize that horseradish is a completely different thing.

This plant has a cool defense mechanism.

As you cut it, it releases a pungent smell that’s supposed to keep you away from eating it. But this doesn’t mean it tasted bad – quite the contrary.

Freshly cut horseradish is pungent and spicy, kind of like wasabi. But when exposed to air for a longer time, it becomes bitter instead.

When cooking, horseradish root is used as a seasoning, not a culinary vegetable.

So, it won’t give your dish the same texture daikon radish would. But, it will give your food that slight peppery flavor it needs.

Even if you can’t find daikon radish in your local superstore, that doesn’t mean you should give up on that recipe.

As you can see, this list has quite a versatile option of the ingredients you can use instead.

Some of them, like cabbage hearts, can be bought in pretty much any store. Others, on the other hand, can only be found in Asian supermarkets at a specific time of year.

Which one is your favorite?

If you liked this article, share it and let the others know what to use as a daikon radish alternative.