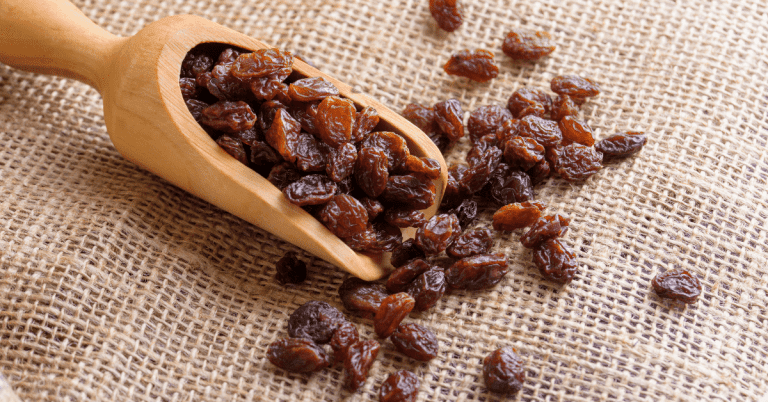 Found an old bag of raisins in your pantry.

They look good, but the date on the packaging says they’re expired.

Eventually, they do. But your bag of raisins might still be good anyways.

Don’t worry, this article will answer all of your questions about raisins, from shelf life to storage options.

Let’s jump straight to the point!

How Long Do Raisins Last

Raisins are a type of grape that’s been through a dehydration process. Without excess moisture, raisins have a rather long shelf life.

For legal reasons, every packaging must come with a “best by” date printed on the label. A bag of raisins is no different.

This date gives you a rough estimate on how long will raisins retain their optimal quality. That doesn’t mean they’ll turn bad after that period of time, but they might start losing flavor and texture afterward.

Raisins, like most dried fruit, can stay fresh in your pantry for at least half a year. But many brands, such as Dole and Sun-Maid, claim their products can last as much as one year.

Once you open the packaging, the shelf life of raisins will become shorter. But as long as you keep them stored adequately (and we’ll talk about that in the last section), they can stay fresh for about 6 months.

If you’re absolutely sure you can’t go through an entire bag of raisins before they go bad, it’s best to freeze them.

Raisins can stay frozen practically forever without spoiling. But their quality will slowly deteriorate in the freezer. Still, you can expect them to last at least a year from the freezing date.

How To Tell If Raisins Are Bad

Grapes consist of more than 75% water. To make raisins, grapes go through a dehydration process, where about 60% of water is removed.

With such a low moisture content, raisins are shelf-stable and long-lasting. Still, that doesn’t mean they can’t go bad. But the signs of spoilage aren’t as obvious as they are with fresh grapes.

Raisins might develop an off odor and a strange color change. If you keep them stored properly, this is unlikely to happen. But if that’s the case, you should definitely throw the raisins away.

Even though they’re low in moisture, raisins can grow mold. This will happen if you keep opened packaging in a damp area. As you probably know, moldy food can get you food poisoning and allergic reactions, so you should refrain from eating it.

Over time, raisins might become less sticky and harder than they used to be. This happens when that little moisture inside them evaporates. While raisins might get a bit hard to chew, their flavor should still be the same.

There’s a simple trick that can soften them enough for your recipe. Just soak them up in warm water for several hours, and they should be good enough for cooking.

How To Store Raisins

Storing raisins is no rocket science. Since they’re shelf-stable, you can keep them in your pantry or a kitchen cabinet.

Still, you need to make sure that the place is dry, dark, and away from heat sources. Even though they’re shelf-stable, raisins shouldn’t be kept near the stove or in direct sunlight. Otherwise, they can go bad much faster.

Whether the packaging is opened or not doesn’t affect how long raisins can last. Likewise, keeping them in the fridge doesn’t extend their shelf life. Well, not unless you live in a hot humid climate.

Ideally, you want to keep them at temperatures between 60 and 65 degrees Fahrenheit. But if your pantry gets hotter than that, the fridge is your best option.

Lower temperature can cause raisins to harden a bit, but as we already established, that can easily be fixed.

Never leave an opened bag of raisins in your pantry. First, you don’t want to find pantry pests making their home inside the bag. And second, moisture and air can get in, causing raisins to spoil at a faster rate.

At the very least, you can keep the bag closed with a clip. But it’s even better to transfer the content into a releasable bag or an airtight container. That way, they won’t dry out even when stored in a fridge.

Because they have a low moisture content, raisins freeze very well. If you plan on extending their shelf life, freezing is your best bet. They can sit in your freezer for over a year without any change in flavor or appearance.

But don’t just throw a bag of raisins into a freezer. They’ll stick one to another and you’ll get a weirdly looking mass.

Instead, you want to flash freeze them first. To do that, take a tray and cover it with a baking sheet. Spread out raisins on the tray and put the whole thing in the freeze.

After an hour or so, they should be flash-frozen. Now, take the tray out and transfer raisins into a releasable bag.

You want to remove as much air as possible from the bag to keep them fresh for longer. If you own a vacuum sealer, that will do the job perfectly. If not, you can use a straw to remove air before sealing the bag.

To defrost raisins, it’s best to leave them in the fridge overnight. But if you plan on using them for cooking or baking, you don’t have to go through that. Instead, just use them as you would use fresh raisins.

Raisins are one of those snacks you can stack up for later use.

They have a very long shelf life and stay edible even a few months after the “best by” date.

And because they’re low in moisture content, raisins can be stored in a pantry.