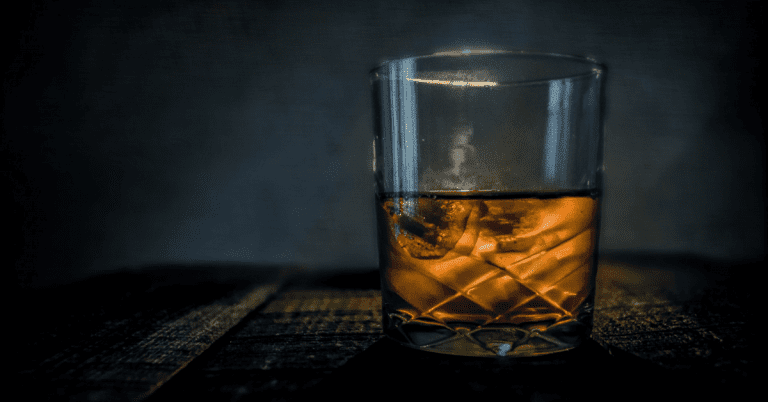 The perfect moment for bringing that old bottle of bourbon from the basement.

Wondering how it tastes after so many years – better, or maybe worse…

Does bourbon go bad in time?

These are all legit questions.

And you’re in the right place to find all the answers.

In this article, I’ll go over everything you need to know about bourbon, from how long it last to how to store it.

Let’s jump straight into it!

How Long Does Bourbon Last?

Unlike wines, whiskeys and other distilled spirits don’t get better with time once they’re in a bottle. They only age while in oak barrels. Once they’re out, the taste won’t change.

When stored in an unopened bottle, bourbon can last for many decades to come.

In other words, you can pass the bottle down to your grandkids, and it will taste the same it did when bottled.

But once you pop the bottle open, things change. Generally, you can expect bourbon to last you 1 to 2 years.

If the bottle is full, that is. As you see, the less there is liquor in the bottle, the more air can come in. Alcohol can oxidize, which affects the quality. So if the bottle is, let’s say, a quarter full, you can expect bourbon to stay fresh for no more than 6 months.

Keeping bourbon in a fridge or freezer won’t keep it fresh for longer. In fact, the only thing low temperature does is dull the flavor and aroma that make this drink great.

How To Tell If Bourbon Is Bad

As we already established, bourbon doesn’t exactly go bad. After all, it has such a high alcohol content, it leaves absolutely no possibility for bacteria to grow.

But while this liquor doesn’t spoil, it slowly degrades in quality once opened.

People love bourbon for its sweet taste with a hint of oak. But when exposed to air for too long, its sweet smoky flavor will slowly become dull.

Once out of the barrels, bourbon has a beautiful rich amber tone. After sitting for too long in an opened bottle, the liquor will turn into a much lighter shade.

To be clear, drinking bourbon that is oxidized won’t get you sick. But don’t expect its flavor and aroma to be as strong as they used to be when the bottle was first opened.

How To Store Bourbon

Because bourbon only ages in wood, no change in flavor and aroma should happen once it’s bottled. Of course, this is given that it’s stored in good conditions.

Whether opened or not, bourbon doesn’t like being exposed to light and temperature. Both can cause chemical reactions that will affect the quality of the drink.

In fact, Bacardi researchers did a little experiment that confirmed that. They exposed bottles of bourbon to ultraviolet light for 15 days. Results showed that it has lost about 10% of its color over that time.

For that reason, you should keep a bottle stored in a place that’s away from light and constant in temperature. If you have a basement or maybe a wine cellar, that’s the perfect place for storing bourbon.

But if you don’t, don’t worry. You can keep the bottle in a cabinet, closet, or even inside a box.

The lower the temperature, the less bourbon will evaporate. But that doesn’t mean you should keep it in the fridge. See, really cold temperatures mute some notes on the note, which affects the overall flavor.

Instead, aim for a storage option that has a temperature of 59 to 68 degrees Fahrenheit. That’s the middle ground that slows down evaporation as much as possible while keeping it flavorful.

While wine bottles are usually stored horizontally, you shouldn’t do the same with bourbon or other spirits that way. That’s especially true for bottles with corks.

When stored in a horizontal position, the cork is in contact with liquor at all times. And because bourbon has such a high alcohol content, it can cause the cork to disintegrate. Then, pieces of cork will mix with your liquor, which is simply disgusting.

This is less of an issue for bottles with screw caps. On the other hand, they’re susceptible to leaking.

The bottle of bourbon should always be stored in an upright position.

But there’s a catch – the cork shouldn’t be dry either or it can crack.

So what you should do every now and then is turn the bottle upside down. That way, the cork stays moist and it’s easier to remove.

Besides light and heat, there’s another factor that affects bourbon – air.

When packed, bourbon is sealed in bottles so no oxygen can come inside. But once you open the bottle and let the air in, it slowly reacts with different substances of the bourbon.

As we already said, the less liquor in the bottle, the more room for air. And the more oxygen, the quicker will bourbon decline in quality.

Once you drink up half the bottle, the best way to preserve the rest is to transfer bourbon into a smaller bottle. Of course, you’ll also have to make sure the bottle is sealed tight so that the oxidation process can be slowed down.

Now, decanters are commonly used for keeping distilled spirits, such as bourbon. While they are cool, elegant, and expensive, they’re not the most practical thing for storing liquor.

Plus, even with a silicone seal or a ground glass joint, they’re not as airtight as we’d like them to be.

For that reason, you shouldn’t use them to store bourbon for a long time. But, if you plan on going through the entire decanter in a month or so, that will be fine.

They might work for storing bourbon for a short amount of time, but they’re not recommended. Plastic reacts with alcohol and, in time, will affect the flavor and aroma of the drink.

If you do end up using a plastic bottle, make sure it’s made of polycarbonate.

Another thing with plastic bottles is that they’re simply not that great at keeping the content stored airtight. And since air turns bourbon bland, that’s something we definitely want to avoid.

Now, let’s about freezing for a bit.

As you may know, alcohol doesn’t have the same freezing point as water. With 40% of alcohol, bourbon will freeze at -17°F. Most freezers don’t go as low, meaning your drink won’t turn solid.

But just like the fridge, the freezer will also dull the notes of bourbon. What’s more, its texture can turn slushy – permanently.

With that being said, you can put a bottle inside a freezer for a few hours to chill it and make its flavor more approachable for casual drinkers.

While unopened, a bottle of bourbon can practically last you forever.

As long as the cork stays sealed, the content of the bottle should be as good as new.

But once you crack the bottle open, bourbon will slowly change in aroma and flavor.

How fast that will happen depends on how you store it.

Bourbon should be kept in a dark and cool place, and transferred to smaller bottles once consumed halfway.