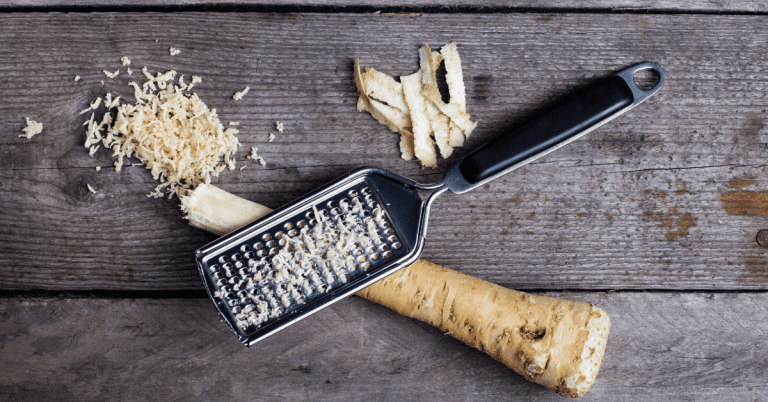 Horseradish is a great addition to so many meals.

But they only require a pinch or so, leaving you with a bunch of leftovers.

Naturally, you’re wondering what to do with it.

Where to store the rest?

Don’t worry; this article has got you covered.

All the answers are here – from how long it stays fresh to storing it properly.

You can stop wild guessing and start reading to find out more.

How Long Does Horseradish Last?

Let’s start with horseradish roots first. Generally, you can keep the roots at room temperature for one to two weeks, given they’re stored in a dry and dark place.

But like most vegetables, horseradish also benefits from being stored in the fridge.

If you wrap it in a cling film tightly and refrigerate, you can expect it to last up to a month.

As for the store-bought horseradish sauce, the exact shelf life depends a lot on the ingredients used. Almost every can will have a “best by” date on it, which indicates how long the condiment will stay fresh.

While unopened, you can store a can of horseradish sauce in the pantry. There, it will retain its quality for about a year.

Once you open the packaging, you should keep horseradish sauce in the fridge to preserve its freshness for as long as possible. Generally, you can expect it to be good for a couple of months after it’s opened.

Most store-bought horseradish sauces are filled with preservatives so that they can stay fresh for that long. On the other hand, the homemade version doesn’t last as much.

From the moment it’s made, horseradish sauce will slowly lose its hotness. It will retain most of its heat for a month. But after three months, it will become rather mild.

Of course, it goes without saying that homemade horseradish sauce should be stored in the fridge at all times.

Freezing can preserve horseradish for another six months or so. A store-bought sauce will probably last a few more months. But there’s no guarantee that, once thawed, it will have the same pungency as before.

How To Tell If Horseradish Is Bad?

Fresh horseradish roots are firm, without any green or delicate parts. In time, it will dry out and turn wrinkly. This is your cue to throw it away, as it’s slowly going bad.

It’s quite common for horseradish root to grow mold over time. This is usually just a surface mold, and it appears because the root is kept in warm conditions without proper air circulation.

In most cases, you can scrape it off and continue using horseradish roots for as long as they’re not showing other signs of spoilage.

The most obvious one is the already mentioned change in texture. Aside from that, horseradish roots gone bad will also turn dark in color.

Fresh horseradish roots don’t have any particular smell until grated. But once spoiled, they might develop an off odor.

The hotness of horseradish doesn’t become prominent until it’s grated.

Basically,  the root cells are crushed during the process. What happens is they release a certain compound that gives horseradish that distinct aroma and flavor.

But over time, that heat slowly diminishes. After a while, ground horseradish roots will be bland and pale compared to the first day. But that doesn’t mean they have gone bad – simply, the flavor was weakened from being exposed to air for too long.

As we already established, store-bought horseradish sauce has a quite long shelf life. But it definitely won’t taste the same after a month of being opened. In fact, it might even turn bitter at some point, even though it’s still safe for eating.

Horseradish sauce, especially the store-bought kind, rarely goes bad. After all, it contains vinegar and salt, which are natural preservatives.

But if you don’t keep it stored properly, mold formation is always possible. If that happens, you should discard the jar right away.

Likewise, if you notice the condiment smelling off and tasting bitter, it’s time to throw it in the trash can.

How To Store Horseradish

If you plan on using the whole horseradish root in the next few days, then you can store it in your pantry or a kitchen cabinet. Just keep it away from heat and moisture, as they might turn it bad rather fast.

To keep it fresh for longer, your best bet is to store horseradish root in the fridge. But if you do, it’s important to wrap it in cling film or put it in an airtight container. That way, you’re protecting it from moisture and air from inside the fridge.

As we already established, horseradish becomes hot once grated or ground. But if you store it like that in the fridge, the flavor will fade away rather quickly. Instead, you should soak grated horseradish in vinegar and keep it in an airtight container.

As for the store-bought sauce, you can keep the unopened can in a cool and dark place, such as your pantry. But once you pop it open, it’s important to store it in the fridge to preserve its hotness.

Of course, you’ll have to keep it sealed at all times when you’re not using it. If the lid stays open, the air will get inside and kill the flavor rather quickly.

It goes without saying that you should always use clean spoons when scooping horseradish sauce. Otherwise, you can introduce microbes and cause the sauce to spoil rather fast. Obviously, dipping sausage into the jar is out of the question as well.

Now, another good storage alternative is the freezer.

Storing horseradish root in the freezer can keep it fresh for about six months. That is, given it’s packaged properly.

It’s important to wrap the root in foil and put the whole thing in an airtight bag. That way, you’re assuring no moisture can get in and cause it to spoil. Still, the potency will slowly deteriorate in time, even at such low temperatures.

Keep in mind that temperature changes can affect the freshness of horseradish root. So if you plan on using it often, it’s best to cut it into small portions before freezing it.

As for the sauce, freezing is possible but not recommended. That’s because it can turn mushy and lose its pungency.

But if you decide on doing it anyway, don’t freeze it in a jar. In most cases, the jar it comes in isn’t freezer-safe and will burst in such low temperatures.

Instead, transfer the content into a releasable bag and take all the air out before sealing it.

Horseradish is known for its pungent flavor and aroma, but it quickly loses its potency when not stored properly.

Both fresh horseradish and sauce are best when stored in the fridge, where they can sit for a long time.

The best way to store horseradish is to keep it in an airtight container. This is true for both sauce and fresh root.