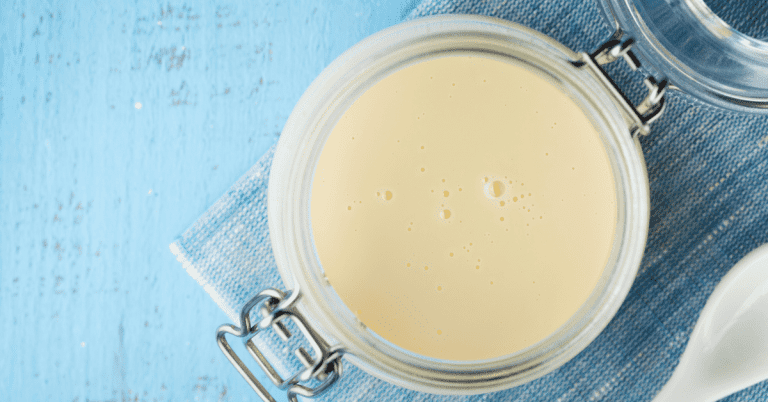 Evaporated milk can be a game-changing ingredient in so many recipes.

But in most cases, you only need to add a tiny bit.

What to do with the rest? Does evaporated milk go bad?

In this article, I’ll share with you everything there is to know about condensation milk.

From how long it stays fresh to what you can do to extend its shelf life.

How Long Does Evaporated Milk Last

Evaporated milk is pasteurized before being canned. What this process does is kills the bacteria and makes it shelf-stable. That’s why it’s sold on the racks and not in the open fridge.

You can keep it at room temperature at home as well, as long as it’s unopened. Each can have a “best by” date on the label, which gives you a general idea of how long evaporated milk will stay good.

Keep in mind that this is just a rough estimate of how long evaporated milk will retain its optimal quality. In most cases, it will stay fresh for a few more months past the date on the packaging.

The “best by” date differs between brands.

Generally, evaporated milk has a shelf life of about a year. But, certain brands make products that stay fresh for as much as 2 years, like Nestle’s Carnation.

Fat-free and low fat evaporated milk will have a somewhat shorter shelf life. In most cases, it can last about 9 months or so.

In case you don’t know, you should never freeze canned goods, including evaporated milk. When frozen, the can swells up and bursts, breaking the seal.

Plus, canning already extends the shelf life for as much as possible, so freezing wouldn’t do much anyway.

Now once you open evaporated milk, it only stays good for 3 to 5 days, depending on the brand.

This is given it’s stored in the fridge.

At room temperature, you shouldn’t leave it open for more than two hours. After that much time, there’s a chance of being contaminated with bacteria.

If you want to preserve leftover evaporated milk, your best bet is freezing. That way you can keep it fresh for about 3 to 6 months.

How To Tell If Evaporated Milk Is Bad

When you first open the can, evaporated milk appears creamy white, slightly darker in shade than regular milk. But if yours appears to be yellow or even orange, then you should definitely throw it away.

As for the texture, fresh evaporated milk is slightly creamier than regular milk, but uniform in texture. But when it spoils, proteins start bonding together, creating lumps. That’s a pretty visible indicator, and you should get rid of it as soon as possible.

What causes the proteins to bond is the increased acidity due to spoilage. Logically, bad evaporated milk tastes sour. That’s quite a noticeable difference compared to fresh product, which is rich and slightly sweet.

Now you might notice some kind of film forming on the surface of evaporated milk. While it doesn’t look appealing, the film isn’t a sign of spoilage.

This is caused by fat in milk being separated when stored in a fridge for a while. That’s easily fixable. Just warm up the can in a bowl filled with water until fats melt. Then, stir it to get a uniform texture.

When it comes to aroma, you shouldn’t expect much of a difference once evaporated milk goes bad. It will become only slightly sourer.

Finally, it’s worth noting that sometimes, you may find no signs of spoilage even if evaporated milk has been opened for over a week.

But even if it looks good, you shouldn’t consume it if it’s that old. After that much time, there’s a good possibility of evaporated milk being contaminated with bacteria.

Consuming it can make you sick. In most cases, you can end up with an upset stomach and nausea. It’s not likely you’ll need medical care, but why risk it?

How To Store Evaporated Milk

Since evaporated milk usually comes in tin cans, it’s clear that it’s a shelf-stable product. As such, it should last a very long time even when kept at room temperature.

This means you can store it in your pantry or inside the kitchen cabinet. The tin is already opaque, so it keeps evaporated milk safe from light exposure.

But, the can doesn’t protect it from heat. That’s why you should avoid keeping it close to the stove or exposed to natural light.

A can does a great job at keeping the product safe from oxidation. But as soon as you open it,  the content gets in touch with air. That’s why it’s important to be stored in the fridge from that moment on.

Of course, you’ll also have to prevent more air from getting in contact with evaporated milk. Once open, a can can’t be sealed properly to remain airtight.

There are tricks with using aluminum or plastic wrap and tightening it with a rubber band. But they won’t keep the air out 100%.

That means your best bet is to transfer the content of the can into an airtight container altogether.

Many brands don’t recommend freezing their evaporated milk. The reason lies in the fact that freezing causes milk to separate. And once you thaw it, it simply won’t be as good as it used to be before being frozen in the first place.

You can fix the texture by stirring or blending, but it will never be the same. Because of that, it might not be ideal for coffee. But thawed evaporated milk can surely work well for cooking and baking.

As I previously mentioned, you should never freeze an unopened can of evaporated milk. It will surely burst under pressure, so it will no longer be “unopened,” right?

Plus, an unopened can already lasts a pretty long time, so there’s no point in extending it even further.

But if you have leftover evaporated milk that you’re surely not going to use any time soon, freezing it can be a good choice.

One way to do it is by pouring evaporated milk into an ice cube tray and storing them in the freezer until solid. Once frozen, take the cubes out and transfer them to a releasable bag.

What you’ve done there is flash-freezing, so that cubes stay separated in the bag, allowing you to take one at a time. This is perfect if you only need a little bit for a single recipe.

Another option is to transfer evaporated milk into a freezer-safe airtight container. You should only add as much milk as you might need for a specific recipe. Because once you thaw it, evaporated milk shouldn’t be frozen again.

When using a container, make sure to leave at least an inch of headspace. Liquid expands once frozen, and without room, it will cause the container to explode.

Remember to label each container with the content and storage date. That way, you can always know if milk is still fresh.

When you’re ready to use evaporated milk, take it out of the freezer and let it thaw in the refrigerator overnight.

Don’t get tempted to do it at room temperature. While it’s much quicker, it can cause bacterial growth after only two hours.

If you’re using milk for cooking, you can skip the thawing process and put the whole cube into the cooking pot.

Like most canned goods, evaporated milk can sit at room temperature for a very long time.

Unopened, its shelf life ranges between 1 and 2 years, depending on the brand.

But once opened, evaporated milk can stay fresh for 3 to 5 days at most when stored in the fridge.

To extend its shelf life, you can freeze it.

But doing so, you’re compromising its texture, so it might only be good for cooking.