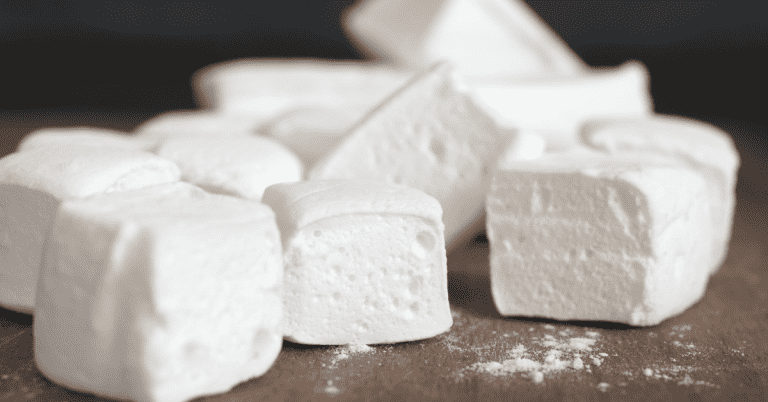 You’re not even halfway through a marshmallow bag – but you’re stuffed like a turkey.

You’re probably wondering what to do with leftovers.

Don’t worry, you can get back to them the next time you have a sweet tooth.

In this article, I’ll show you how long marshmallows last as well as how to properly store them.

How Long Do Marshmallows Last?

Marshmallows are made of sugar, corn syrup, and gelatin.

Since none of these ingredients can spoil, neither do marshmallows. At least in a traditional sense of the word.

But their quality deteriorates in time. That’s why each packaging has a “best by” date on the label. That’s a manufacturer’s rough estimate on how long marshmallows will keep their flavor for.

The shelf life differs between brands, depending on the ingredients used.

Some of the most popular marshmallow brands out there have a shelf life of between 5 and 7 months.

The “best by” date of most store-bought marshmallows is 5 to 7 months. But despite that, you can expect them to stay fresh for a few more months after that period, given they’re stored properly (and we’ll talk about that in the last section).

But once you open the packaging, marshmallows will deteriorate in quality at a faster pace. Still, you can expect them to stay fresh for at least 2 to 3 months.

Marshmallow cream, store-bought, lasts only about 3 to 4 months. That’s because it contains egg whites, which affect the overall shelf life.

Finally, it’s worth noting that storing marshmallows in the fridge won’t do much when it comes to shelf life. The temperature doesn’t affect their taste in any way.

But what it does is prevents them from sticking together. If you’re living in a hot climate, the room temperature might be warm enough for marshmallows to melt and turn into one gooey substance.

With that being said, certain brands do claim their marshmallows stay fresh for 2 to 3 more months when stored in the fridge. But that’s mostly the case with flavored marshmallows that contain other, spoilable, ingredients.

How To Tell If Marshmallows Are Bad?

As we already established, marshmallows don’t turn bad the same way eggs or milk do, for instance. Even so, there are a few possible scenarios that will make you not want to eat it.

If you leave an open bag of marshmallows on the counter, don’t be surprised to find insects inside. Pantry pests are attracted to any food that is high in sugar.

Now, a single marshmallow candy contains as much as one teaspoon of sugar. So that bag on the counter is the perfect place for pantry pests to make their home and lay eggs in.

Truth be told, most of these insects pose no health risks if eaten. The same goes for their eggs and larvae. Of course, that fact doesn’t make accidentally eating them any less than gross.

So if you see any insects anywhere close to an open bag of marshmallows, it’s best to simply throw the whole thing into a garbage bin.

Even though marshmallows don’t spoil, external factors like heat or air can cause them to change over time.

If you keep an open bag of marshmallows in a humid place, like the fridge, candies will become tacky and stick one to another. Sugar, which they’re high in, is hygroscopic. That means it attracts and holds onto water molecules.

In an open bag, the sugar in marshmallows will interact with the moisture, resulting in that weird gooey matter.

This doesn’t mean that marshmallows have turned bad. They’re still perfectly safe to eat. But instead of being fluffy, they’ll become chewy, almost rubbery.

If you keep marshmallows in a warm environment, they might start melting. But unless your room temperature is 100 degrees, they won’t melt completely and become creamy.

Instead, the candies will turn into one big lumpy marshmallow that’s sticky and gummy.

But even if they’re kept safe from heat and moisture, marshmallows won’t retain their sweet taste and aroma for too long. Over time, their taste will slowly go bland.

Marshmallows enhanced with artificial flavors will behave the same way. The only additional ingredient is the flavoring, and since it’s synthetically produced, it can’t go bad.

But if they contain perishable ingredients, like fruit, chocolate, or nuts, they can spoil over time.

How To Store Marshmallows

Regular marshmallows contain no ingredients that can go bad, so you don’t have to pound your head over proper storage.

An unopened bag of marshmallows is safe when stored in your pantry or inside the kitchen cabinet. Just don’t use the cabinet that’s close to the stove, as you don’t want them to melt as soon as you turn it on.

Even after you pop the bag open, you can keep marshmallows stored at room temperature. But one thing you need to make sure of is that the bag is sealed tightly. That way, you’re protecting the content from moisture as well as from nasty pests in your pantry

The easiest way is to twist the bag a few times around the opening, then use a rubber band to tie it together. If you don’t have one close at hand, use a twist tie instead.

Another option is to throw away the original bag and transfer marshmallow candies into a releasable bag or an airtight container.

Intuitively, you’re probably predicting the next step to be getting the air out before sealing. But while that works with tons of foods, that’s not the case here.

See, marshmallows get their fluffy texture from air bubbles that are trapped inside the sticky and stretchy substance. If you remember middle school physics, then you know that air has no definite shape or volume – it expands to fill the container.

When you create a vacuum inside the packaging, you’re leaving a good deal of free space inside. But there are still some air bubbles in the container, trapped inside a soft and stretchy substance.

So what happens is these air molecules start to expand to fill the empty space, causing marshmallows to expand until there’s no more room inside.

But as soon as you open the container and air comes in, marshmallows will shrink under pressure and become dry.

While they’ll get back to their usual state in time, they’ll never be as puffy and soft as they were before.

Marshmallows can also be stored in a freezer, but not for the reasons you might think.

They don’t have a high enough moisture content to turn solid at low temperatures. They’ll turn slightly harder but that’s pretty much it. Some people actually prefer to eat marshmallows like this.

As for extending the shelf life, there’s not a lot of evidence to back that up. Most brands don’t recommend freezing their products, as you might change the texture a bit. Still, there are lots of marshmallow lovers that swear freezing keeps them fresh for longer.

Willing to give it a try?

If the bag is unopened, you can simply throw it in the freezer until you need it. But if you’ve opened the packaging, it’s important to transfer the content into an airtight container or a bag to prevent moisture from getting in.

Because they don’t freeze, marshmallows don’t need to be thawed either. They’ll come to room temperature in a rather short amount of time.

Keep in mind that marshmallows might become sticky once taken out of the freezer. At that point, there’s little you can do to separate them. But there’s an easy trick you can do before freezing to prevent them from sticking together.

Apply a thin coat of corn starch on each candy. If you don’t have any, you can use powdered sugar instead. Cornstarch is actually added to freshly ground sugar to prevent particles from clumping together. That will work here as well.

Marshmallows are one of those snacks you can keep in the pantry until you feel like eating them.

Unopened, they can stay fresh even a few months after the “best by” date. Once you open the bad, their quality will deteriorate within the next few months.

While marshmallows don’t go bad, their texture can change when exposed to heat or moisture.

That’s why it’s important to keep them in airtight packaging and store them in a cool and dry place.