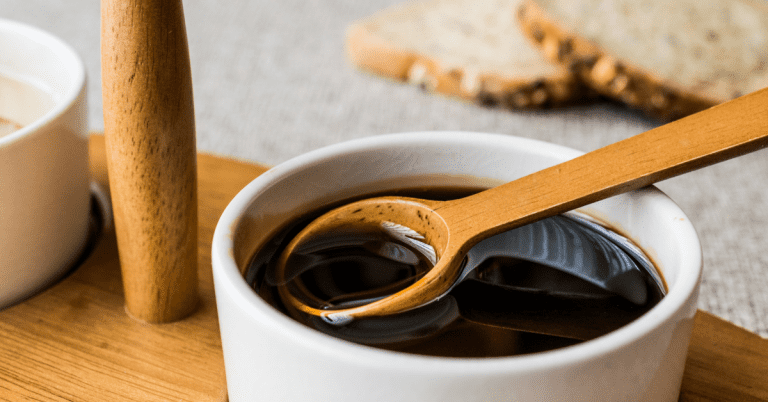 It’s time to give that old jar of molasses a try.

But what if you can’t read the best-before date on the washed-out packaging?

Ultimately, it does. But the answer is not that simple, as there are a lot of factors that can affect the shelf life of molasses.

In this article, I’ll go over everything about molasses, from how long it can last to how best to store it.

Keep reading to find out!

How Long Does Molasses Last?

The shelf life of molasses is quite debatable. You’ll hear people saying it’s anywhere from a few months to as long as a whole decade.

Generally, a best-before date printed on the label is a good indicator of a freshness timeline. Now in most cases, this date is a few years away. So, you might be wondering how strictly you should stick to it?

Some brands will tell you to throw molasses away once the printed date passes. It doesn’t matter if you’ve opened it yesterday. Other brands suggest you should open the packaging within this timeframe, and use it in the next six months or so.

Unless stated otherwise, you can expect unopened molasses to last you a few years when stored in a cool and dark place. Once you open the packaging, it should retain optimal quality for at least six months.

Again, this is not a given, and it depends a lot on the brand. Some molasses products out there are made of young sugar cane. That’s why they also contain sulfur dioxide to make it stable and prevent premature spoiling. Because of that, such products last a good few years.

However, most brands nowadays make unsulfured molasses. Without preservatives, its shelf life can be drastically shorter. In some cases, it’s best to use it within six months from purchase.

How To Tell If Molasses Is Bad?

As you probably know, molasses contains a bit of water and tons of sugar. In such an environment, it’s hard for bacteria to grow.

But if you add heat and humidity to the equation, this can easily change the situation. In that case, bacterial and mold growth can easily occur. Luckily, that’s easily noticeable. If you see fuzzy patches or spots of different colors, molasses has probably been contaminated with these pathogens.

If that happens, you might be tempted to remove only the affected part. But even though molasses is thick in consistency, it’s not solid. Because of that, bacteria can potentially spread through the entire content of the packaging. That’s why you should throw the thing away even if only a tiny spot appears.

Other signs molasses is no longer fresh are not as obvious. Taste is one of those clues. Try a tiny bit of molasses, and if tastes different than usual, it’s time to throw it away.

Just keep in mind that there are different types of molasses, and they all taste a bit different. So you should know how the type you’ve bought tastes before doing a check.

Fresh molasses smells somewhat sweet and smoky. If your packaging of molasses smells off, that’s a sign it’s gone bad. By off, I mean sour, pungent, and even chemically.

There could be some change in texture as well. If it separates or crystallizes, that could indicate it is no longer good.

The thing with molasses is that flavor degrades over time, no matter if it’s opened or not. Of course, this doesn’t mean it has gone bad. But it definitely tastes weakened and its nutritional values are diminished. You can still use it, but it won’t be at its best potential.

How To Store Molasses

As we already established, heat and moisture can cause molasses to go bad prematurely. For that reason, you should store it in a cool and dry place, such as your pantry.

You might be tempted to keep it close at hand, like above the stove. But then you’ll be exposing it to heat too frequently, and that might cause it to spoil.

The fridge is another storage option, as it will keep it at a consistent temperature. This is especially useful if you live in warmer climates, and days can be much warmer than the nights.

But while a possibility, storing molasses in the fridge is not a must. Especially because it will become thick and really hard to pour.

Wherever you choose to store molasses, there’s a single rule that applies – keep the lid tightly sealed when not in use. This will prevent moisture and air from getting in and causing it to turn bad in a short amount of time.

Furthermore, you should always make sure the lip of the packaging is always clean. After each use, grab a paper towel and clean it before sealing. It’s also important that you always use clean utensils to scoop molasses. Otherwise, you might contaminate it with bacteria.

Finally, you’re probably wondering if molasses can be frozen. In theory, you can, but it’s not advisable. And with such a long shelf life, there’s really no point in doing that, is there?

But here’s why freezing molasses isn’t recommended. Such low temperatures will affect the viscosity. And because of its ultra-high sugar content, it simply won’t freeze properly.

When you try to thaw molasses, you’ll notice it’s no longer uniform in texture. Just like honey, molasses can crystalize and become grainy. And not just that, but the process of defrosting can actually promote mold growth.

Now if you decide on freezing molasses anyway, you shouldn’t do it by just sticking the packaging inside the freezer. In most cases, molasses doesn’t come in a freezer-safe container, so you’ll have to transfer it to one.

Just make sure to leave an inch or so of free space. That way the packaging won’t burst once frozen.

Molasses is one of those things that can sit in your pantry forgotten about. In fact, a jar of molasses can last at least three or four years unopened. Once you pop it open, it’s best to use it in the next six months.

However, these are just rough guidelines, and you can expect the product to last much longer when stored properly. It’s best to rely on your senses than on a printed date.