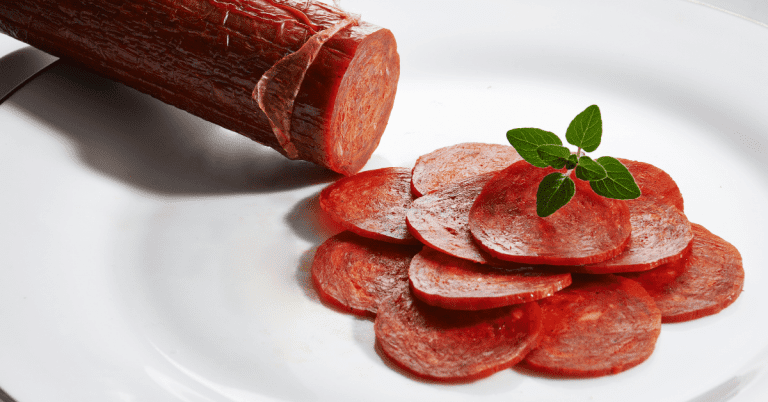 But what to do with all the leftover pepperoni?

The answer isn’t as straightforward as you may think.

Let’s just say that the answer depends on the say it’s stored.

Intrigued to find out more?

How Long Does Pepperoni Last?

Like any type of deli, pepperoni has an expiration date. But since it’s made of cured meat, so you can expect it to have a bit longer shelf life than other types of sausage.

The packaging should already have a best before date printed on the label.

This isn’t a strict timepoint after which pepperoni instantly turns bad, but more of a rough indicator. When stored properly, pepperoni should last you at least a week after the printed date.

According to the USDA, unopened pepperoni can last indefinitely when stored in the fridge. But since it’s a type of dry sausage, pepperoni can also be stored at room temperature. In the pantry, they’ll stay fresh for about 6 weeks.

Once you break the seal, you should store pepperoni in the fridge. When kept at room temperature for more than 2 hours, there’s a possibility that bacteria has already infected it.

Once opened, pepperoni will stay good for about 3 weeks or so when stored in the fridge. This is given that it’s stored properly.

If you can’t go through the entire packaging in time, you can always freeze the leftovers. This, however, isn’t recommended by most brands, because it can destroy the texture.

But if you decide on doing it anyway, you can extend the shelf life of pepperonis for up to 2 months.

How To Tell If Pepperoni Is Bad?

The process of dry curing makes pepperoni shelf-stable. Because it has low water and high sodium content, pepperoni is not a friendly environment for bacterial growth.

Of course, inadequate storage can turn it bad. Luckily, the signs of spoilage are pretty easy to recognize.

First, let’s talk about texture. Pepperonis are made of mostly shoulders and belly, which are meat cuts high in fat. Over time, fat breaks down and turns the whole sausage slimy.

If you see that happening, it’s time to throw it in the trash. Pepperoni is no longer good, and eating it can cause food poisoning.

If pepperoni appears to be dried out, on the other hand, that doesn’t mean it’s gone bad. This occurred because you didn’t store it correctly, so it was exposed to air. It’s perfectly safe to eat dried-out pepperoni, although the change in texture will make it hard to chew and not very enjoyable.

Another clear sign of spoilage is the change in odor. When fresh, pepperoni smells slightly cheesy and acidic. But if it turns putrid and rancid, kind of like rotten eggs, it’s no longer good.

The change in flavor is also apparent in spoiled pepperoni. Pepperoni has a salty, spicy, and a bit tangy flavor. But it’s never sour. If that happens, it’s not safe to consume.

Pepperoni has a very low moisture content. But if you don’t store it properly and it gets exposed to moisture, there’s a possibility of mold growth. Fuzzy green spots are hard to miss, and they are your cue to toss away pepperoni.

White spots, on the other hand, don’t necessarily mean spoilage. The low temperature inside the fridge can solidify fats and salt. This is by no means dangerous, so you can eat pepperoni without worries.

How To Store Pepperoni

If the packaging says that pepperoni is shelf-stable, then you can store it unopened in your pantry or the kitchen cabinet that’s away from the stove.

But keeping it in the fridge allows you to keep it fresh until opened. Once you break the seal, pepperoni should always be kept in the fridge. Even 2 hours at room temperature makes it easy for harmful bacteria to grow.

Once opened, it’s important to transfer leftovers into an airtight container. Plastic is okay, but glass is better because it retains no odor. It’s important to protect it from air and moisture, as it can affect its taste and texture.

When it comes to freezing, most brands don’t recommend freezing their products. Freezing itself isn’t bad, but the process of thawing can turn it bland and mushy, and who likes pepperoni that way?

But depending on the ingredients used for making pepperonis, some products might turn okay after defrosting.

Freezing is not that bad, anyways. If can preserve an opened packaging of pepperoni practically indefinitely. With that being said, you can still expect it to diminish in quality after years of being frozen.

If you’re set on freezing pepperonis, here’s a tip – portion it beforehand. If you plan on using it for pizza, for instance, you’ll only need a little bit.

You shouldn’t freeze pepperoni more than once. So prior to freezing it, cut the stick into smaller portions. That way, you can thaw only the amount you need.

Wrap pepperoni into plastic wrap or aluminum foil, then put it into a releasable bag. This will prevent freezer burn from happening. Take all the air out with a straw before sealing the bag. Or, if you own a vacuum sealer, you can use that instead.

You should always let pepperoni thaw in the fridge. This means you’ll have to take it out of the fridge many hours before you plan on using it.

By letting it defrost at room temperature, you’re exposing the sausage to bacteria, and it might spoil within a few hours.

Pepperoni is one of those deli meats that you can stock up on without worrying about spoilage.

Most products are shelf-stable and can sit in your pantry for 6 weeks. But by just storing it in the fridge, you can keep unopened pepperoni for practically forever.

Once opened, it’s important to keep pepperoni protected from air, heat, and moisture. When stored properly, it can stay fresh for a few weeks in the fridge.