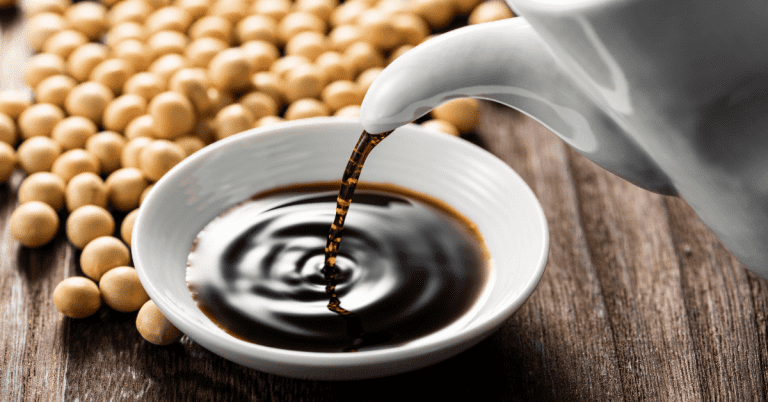 Forgot to add soy sauce to your takeout order and realized that too late?

Wonder if that old bottle will do?

The real question is – does soy sauce go bad?

You’re in luck. There’s a pretty good chance your old soy sauce bottle is still fresh. Wonder how I know?

In this article, I’ll cover everything, from soy sauce shelf life to proper storing conditions.

How Long Does Soy Sauce Last?

All store-bought soy sauces feature a best-before date on the label. Now as you probably know, this is not an expiry date, meaning soy sauce won’t go bad after that much time. It will be safe to eat, although its flavor and nutritional value won’t be at their best.

There are tons of different soy sauce varieties. We can divide into two groups depending on their production methods. Traditional soy sauce is a product of fermentation, like wine or beer. It’s made by adding wheat and yeast into the equation and left to brew for months in tanks.

Shoyu is such a type of soy sauce. Because it’s naturally fermented, it will keep its peak flavor for up to two years unopened. Once you pop the bottle open, it will last a good three or four months when stored in the fridge.

Some soy sauces are made chemically, by being boiled in hydrochloric acid for less than a day. This method is much faster and cheaper than the traditional one. However, the final product is weaker in flavor and aroma, so they’re usually seasoned additionally.

Of course, in both of these cases, the shelf life of soy sauces is a matter of freshness, not consumption safety. If stored correctly, it will last you ages to come.

Finally, there’s also Tamari, which is a type of soy sauce that contains no wheat. It also contains less salt and additives, and that makes its shelf life rather short. When opened, it will retain freshness for about two to three months.

How To Tell If Soy Sauce Is Bad?

Soy sauce has a high sodium content, which makes it very difficult, although not impossible, for bacteria to grow. Basically, it kills them by sucking out water content from their cells.

Still, there are some types of bacteria that are little affected by high sodium concentration. Furthermore, salt does nothing to prevent mold growth. So if you keep the container open, you’re risking possible mold contamination.

In case soy sauce does go bad, signs will be pretty obvious. You’ll notice fuzzy growth and an unusual, pungent odor from a mile. If that happens, throw the soy sauce away.

Now, in the case of naturally-processed soy sauces, you might see a white substance forming on the surface. This is not mold, but a film of yeast added during the manufacturing process. In terms of food safety, this won’t cause any harm to your health.

However, it can affect the flavor of soy sauce. For that reason, you should remove the film as soon as you see it forming.

Spoilage is very unlikely if you keep the packaging sealed when not in use. Soy sauce will be edible for years to come, although it will lose some flavor and aroma.

As soon as you open soy sauce, the oxidation process starts, causing it to degrade over time. This will cause soy sauce to darken in color and taste dull.

How To Store Soy Sauce?

Because of its long shelf life, you can stock up your pantry with tons of bottles of your favorite sauce. Once opened, there are a few options for storing it.

If you often use soy sauce for cooking, you’re likely to go through a bottle in a month or two. In that case, there’s no need to take up precious space in your fridge.

Instead, you can keep it close at hand. Ideally, in a cabinet that’s away from heat and direct sunlight. Keeping soy sauce next to the stove or on open shelving will make its quality degrade much faster. For this reason, shelf racks aren’t the best option, although they look pretty good on a counter.

In most cases, the packaging store-bought soy sauce came in is decent enough for storing. Just make sure you always keep it closed properly. If it comes with a screw lid, make sure it’s tight all the way. In the case of a flip lid, push it down all the way, until you hear the click sound.

If you don’t use soy sauce that often, keeping it in the fridge will extend its shelf life tremendously. This is, of course, given you’re also keeping it well sealed.

Finally, you might be wondering if soy sauce can be stored in the freezer. Given the fact that soy sauce lasts for years in the fridge, there’s little need to extend its shelf life even further. But I’ll answer your question nonetheless.

Soy sauce can’t be frozen. That’s because of its high sodium content. Salt doesn’t allow water molecules to connect together and make ice crystals. For that reason, soy sauce will stay in liquid form.

Soy sauce is one of those ingredients that can last for years in your pantry or fridge.

Like most foods, it can get contaminated when exposed to air, heat, and moisture. But as long as you keep it in a sealed container and clean of food crumbs, soy sauce won’t go bad.

It will, however, lose its potency over the years.