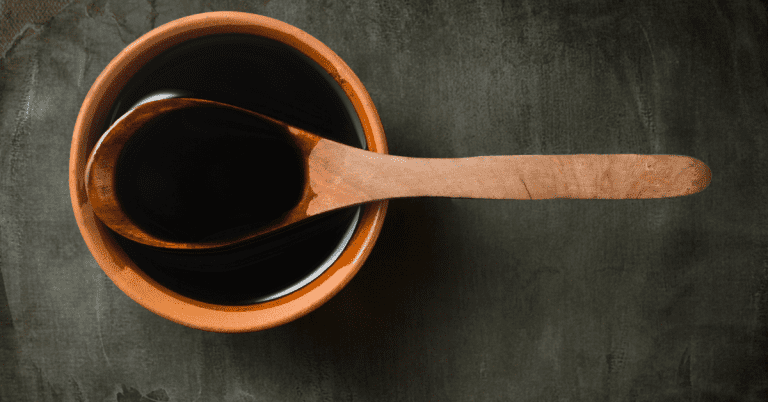 A staple in Asian cuisine, dark soy sauce is also used all over the world.

Who doesn’t like adding caramel color and umami flavor to their noodles?

But if you’ve realized you’re out of this condiment mid-cooking, don’t panic.

There’s probably some dark soy sauce substitute in your pantry.

In this article, we’ll go over the best alternatives for this all-time favorite Chinese sauce.

One of the best substitutes for dark soy sauce has got to be its light-colored cousin.

You can add light soy sauce to your meal in the same amount as the darker version. It will give you the same umami, salty flavor you’re looking for.

But keep in mind that light soy sauce isn’t as sweet as dark soy sauce. But that can easily be fixed by adding a bit of molasses to it.

What’s more, light soy sauce is golden brown in color and thinner than its darker counterpart. So don’t expect it to give your dish that dark glaze you’re used to.

To achieve that, you’ll need to use some other substitute from this list.

Worcestershire sauce is made of much more ingredients than soy sauce, which makes it complex in flavor.

But while they’re so different in content, they can be used as substitutes, especially for sauces and marinades.

Worcestershire sauce is strong but not as sweet as dark soy sauce.

This means that you should add some kind of sweetener to achieve a similar flavor.

Aside from that, you can use it in the same amount you’d add soy sauce to your dish.

Just keep in mind that Worcestershire sauce isn’t as thick and dark, so you won’t achieve that juicy caramelized glaze by using it.

What makes oyster sauce a great substitute is its salty and sweet flavor. Plus, it’s also dark, so you can achieve the same color you would by using dark soy sauce.

Considering what it’s made of, it comes as no surprise that it will give your dish a slightly fishy flavor.

Generally, you can use the same quantity you’d use dark soy sauce. But keep in mind that’s a bit sweeter, so you should add less at first and check how it tastes.

What’s more, oyster sauce is thicker than dark soy sauce, so you might want to dilute it with a bit of water to reach the same consistency.

While it uses soy sauce as the base, teriyaki sauce is more complex in flavor because of a few other ingredients.

Still, if you use it as a substitute in most Asian-style dishes, you can barely notice the difference.

Both of these sauces have a salty and sweet flavor profile, so they’re perfect for the marinade. They’ll also both give you that perfect juicy glaze on your meat.

Teriyaki sauce is also similar in color and consistency to dark soy sauce.

You can use them interchangeably in the same quantity. But in case the recipe also asks for ginger and garlic, you should omit them as teriyaki sauce already contains these spices.

Depending on the brand, hoisin sauce might contain different spices, such as cinnamon or star anise. But when it comes to flavor, hoisin sauce has that distinct saltiness followed by umami and sweet taste – just like dark soy sauce.

If you want the dish to taste and look the same, you can easily use hoisin sauce as the substitute. However, it’s thicker and sweeter than dark soy sauce, so you should use it in lower quantities.

Start by adding half of the quantity you’d add dark soy sauce. Then gradually pour more if you feel like the recipe is missing the desired flavor.

This is a rather situational substitute for dark soy sauce. It’s made of anchovies, so it has that strong fishy smell. For that reason, it works well for seafood and fish meals, but it’s not a good choice for delicate meat like poultry.

The taste, on the other hand, is much more subtle and relatively similar to the dark soy sauce flavor profile.

But because of the strong aroma, you should add only about half the quantity you’d add dark soy sauce. If your recipe asks for vinegar, omit it as the fish sauce has a similar fermented flavor.

Furthermore, you should know that fish sauce is light and opaque, so it won’t give your food that glazes as dark soy sauce would. To achieve that, you should use a different substitute.

Tamari and dark soy sauce are similar in color and flavor, so they can easily be used interchangeably.

In fact, the main difference between the two is the fact that tamari is gluten-free.

Generally, you can use Tamari in the same quantity as dark soy sauce.

Being so similar, it’s highly unlikely you’ll notice the difference. Depending on the brand, it might contain less sodium than dark soy sauce. But that’s easily fixed by sprinkling a bit of salt on the dish.

This might not be the best dark soy sauce substitute out there, but it can work when it’s the only thing in your pantry. Balsamic vinegar is sweet and gives food that dark color, just like dark soy sauce.

But, it also has that strong, acidic flavor that might be too much for your dish.

Because of that, you should add only half a cup for every cup of dark soy sauce in your recipe.

Alternatively, you can dilute it in water to achieve the same intensity. You also might want to add a bit of sugar to counter the acidity even further.

Basically, this is dark soy sauce mixed with a bit of molasses, which makes it darker, thicker, and a bit sweeter.

The flavor profile of both of these soy sauces is relatively the same, but the intensity is much stronger with double black soy sauce.

Its sweetness can easily kill off the flavor of your dish. Start by adding half the amount you’d use otherwise and go from there.

If the dish already asks for sugar, you can omit it. Molasses in double black soy sauce will make up for that.

While they’re both made of fermented soybeans, these two condiments are quite different.

While miso paste is creamy, dark soy sauce is a thin, almost watery liquid. Still, that doesn’t mean miso paste can’t be used as a substitute.

Now there are the common miso varieties: white, red, and mixed. Between the three, red miso is probably the closest to dark soy sauce in terms of color and umami flavor.

You should add a tablespoon of miso paste for every cup of dark soy sauce. But since miso contains less sodium, you might need to sprinkle a bit of salt to achieve the same flavor.

As the name suggests, this is just a flavored version of dark soy sauce. It’s perfect for mushroom dishes as it emphasizes the flavor. But it can definitely work for other types of meals as well.

That is, of course, in case you like the way mushrooms taste. Otherwise, you might want to skip on this substitute.

Use the mushroom-flavored version in the same amount you’d use dark soy sauce. Only a spoon or two are enough to give your dish that caramelized color and emphasize the umami flavor profile.

Still not sure about these substitutes? Here are a few questions that you might be wondering about.

What Is The Difference Between Dark And Light Soy Sauce?

Aside from the obvious difference in color, dark soy sauce is also thicker and slightly sweeter than light soy sauce. Aside from flavoring food, it’s commonly used to give it that dark, caramelly color.

Dark soy sauce also has about 15% higher sodium content than the light version. But because of its sweetness, that’s not so obvious. That’s something to keep in mind when cooking with different types of soy sauce.

Is Dark Soy Sauce The Same As Hoisin Sauce?

While both are made of fermented soybeans, these two sauces are not the same thing. Hoisin sauce also contains ingredients like garlic, sesame oil, chili, and even vinegar.

It’s thicker, sweeter, and more complex in flavor than dark soy sauce. Still, they both will give you a pretty similar result when used in cooking.

Dark soy sauce really brings out the umami flavor in any dish. Plus, it gives that beautiful caramelized glaze that makes you lick your fingers.

But if you run out of dark soy sauce, it’s not the end of the world. As you can see, there are enough great alternatives that will work just as well.

Have you already picked your favorite?