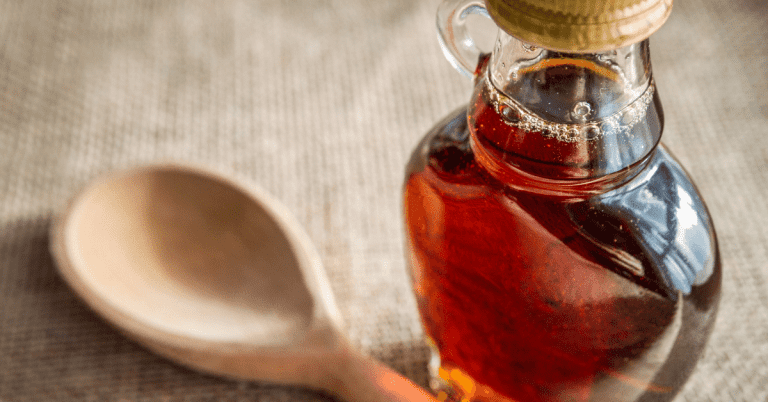 Maple syrup is a staple on a breakfast table.

But, maybe you’re looking for a healthier option to put on your toast. Or, you just want something that’s not as expensive.

In any case, there are a bunch of reasons why you might need a maple syrup substitute.

In this article, we’ll go over some of the best alternatives you can use instead. What’s more, you’ll learn how to make your own maple syrup at home.

So keep on reading!

Honey is, hands down, the best substitute for maple syrup. They’re similar in both texture and color.

Whether you need it for baking or as a topping for pancakes or toasts, honey will perform just as well as pure maple syrup.

Obviously, the flavor of honey is not quite the same, but it comes pretty close. Honey is also a tad sweeter, but not enough to affect the amount you should use.

Generally, you can substitute maple syrup for honey in a 1:1 ratio, without affecting the recipe.

Corn syrup is probably not the first thing you want to put on pancakes. But, it’s actually a great substitute for maple syrup. In fact, most store-bought pancake syrups are actually corn syrups with artificial maple flavors.

There are actually two kinds of corn syrups: light and dark.

The former is transparent and flavored with salt and vanilla. The latter, on the other hand, contains molasses. That gives it a rich, sweet flavor and dark color.

You can use either of them as a substitute for maple syrup, in a 1:1 ratio.

But between the two, dark corn syrup is slightly more similar to maple syrup, because of its high sugar content and color.

This is just a variation on simple syrup that uses brown sugar. It works well as a substitute to maple syrup as they have a pretty similar flavor, consistency, and color.

The best thing about brown sugar syrup is that you can easily make it at home.

You just need water and, well, brown sugar. Add half a cup of both ingredients into the pan, and mix until sugar dissolves.

A cup of syrup you just made is roughly equivalent to ¾ cup of maple syrup.

Molasses is at the top of the list of maple syrup substitutes.

They’re pretty similar, but maple syrup is a bit sweeter, lighter, and thinner than molasses.

What’s more, molasses has a prominent caramel note, while you can only sense a subtle hint of caramel in maple syrup.

Using molasses in a recipe will give your meal a deeper, slightly buttery flavor and a rather dark color.

You can add it in the same quantities recipe asks for maple syrup. But your dish might not be sweet enough, so you’ll need to add a bit of sugar to even it out.

Golden syrup is rather similar to maple syrup, but it’s a bit sweeter.

What’s more, you can feel a hint of deep bitterness like molasses. Nevertheless, it can be used in a dish in the same way you’d use maple syrup.

Golden syrup can be used in a 1:1 ratio.

Just keep in mind that it doesn’t caramelize as quickly as maple syrup.

If you’re using it for baking, you might end up with a “runny” dish. Golden syrup is much better when used as a topping substitute.

Agave nectar is rather similar in texture to maple syrup. The flavor is not quite the same though. You could say that it resembles honey more, with a slightly bitter aftertaste.

To achieve the same results, you should use agave nectar in place of maple syrup in equal quantities.

However, you should know that it also has the highest fructose content of all sweeteners. Agave nectar is a whopping 90% fructose, unlike maple syrup, which is only 35%.

Don’t eat too much of it!

Caramel syrup is made of water and sugar – just like simple syrup.

Now, what makes them different is the way they’re cooked. Caramel syrup is made at higher temperatures, which gives the sugar brown color and a slightly bitter taste. Sometimes, fat is also added to create a softer texture.

Caramel syrup can be used in approximately the same amount as maple syrup in any dish. Their flavors, consistency, and colors are rather similar, so you probably won’t notice the difference.

This is a great natural alternative to maple syrup. It’s mildly sweet with slight caramel notes. It’s lighter in color than maple syrup, but rather similar in consistency.

What’s even better, it’s a much healthier alternative. Coconut nectar is minimally processed and rich in minerals, antioxidants, and amino acids.

Generally, you can use coconut nectar in a 1:1 ratio. But because it’s not as high in sugar like maple syrup, you can be heavy-handed with it.

This is just another name for a classic simple syrup. It’s made with just two ingredients you have at home: water and sugar.

But instead of letting the mixture caramelize, you’re just letting it simmer until the sugar dissolves completely. Both ingredients are added in the same quantity, but you can adjust them according to your preference.

While these two syrups are pretty similar in flavor and consistency, maple syrup is a tiny bit sweeter. So ideally, a cup of white sugar syrup replaces about ¾ cup of maple syrup.

What’s better than maple syrup? A homemade version of it, of course!

This is especially true in the case of maple syrup, as most store-bought options don’t even contain maple sap! Instead, they use corn syrup and artificial maple extract to mimic the flavor of true maple syrup.

Corn syrup is high in fructose, way more than our bodies can metabolize at a time. What’s even worse, there are very few nutrients in it. Real maple syrup, on the other hand, contains important vitamins and minerals, such as manganese and zinc,

So why use the fake stuff when you can make the real deal at home? It’s also very easy to make. Here’s what you’ll need:

And here’s how to make maple syrup, step by step:

If you want to enhance the flavor, you can also add ¼ cup of honey to it. Don’t do more than that, or honey might overwhelm the flavor of maple. What’s more, you can add a few tablespoons of butter to get that smooth, soft texture.

Finally, a tablespoon of vanilla can give your maple syrup a slightly deeper flavor.

Homemade maple syrup can last you up to two months when stored in the fridge. If it gets too thick to pour seamlessly, you can microwave it for a few seconds.

Still have questions about maple syrup substitutes? Here’s a bit more info that could potentially be the answers you’re looking for.

What Is A Healthy Alternative To Maple Syrup?

Raw honey is one of the healthiest substitutes for maple syrup. It’s rich in vitamins, minerals, and antioxidants. Raw honey has tons of health benefits. These include antibacterial, wound healing, and anti-inflammatory effects.

Regular honey isn’t as beneficial because it goes through the pasteurization process. That makes its shelf life longer, but it kills a good amount of antioxidants. That doesn’t mean it’s bad – but it can’t compare to its natural cousin.

What Is The Best Maple Syrup Alternative For Baking?

Honey is also the best maple syrup substitute for baking. That’s because it has the most similar texture and sweetness. Plus, they also have the same color, so your food won’t look any different.

Maple syrup brings a uniquely sweet flavor to a meal, whether it’s used as an ingredient or as a topper.

But there are many reasons why you might want to use an alternative – including price and health benefits.

What do you think about this list? It has a bit of everything, including easy homemade substitutes. If you like it, share it so your friends and family can see it.